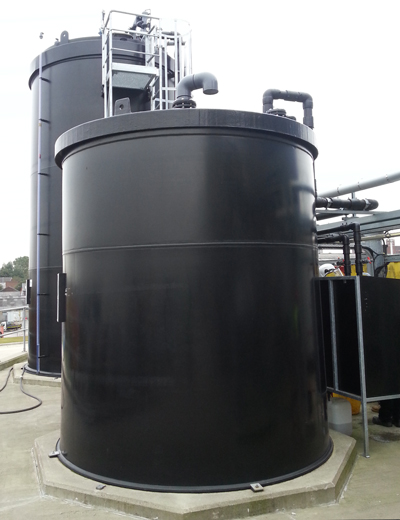 A Danish company in the agricultural industry preferred IWAKI for a tank system to dillute 96% sulfuric acid to 10 and 30%.

The customer requested an isolated and cooled tank with a dosing unit that would add 96% sulfuric acid to water to achieve the desired concentration. Cooling and isolation was required as the dilution process generates heat.

IWAKI proposed a solution with a tank from Weber Kunststofftechnik equipped with a ring cooler, mixer, insulation and control unit for cooling control, dosing and filling and drainage of the tank. The tank was located near seawater, which should be used for cooling.

A drainage system was also offered for pallet tanks to facilitate further transport of the final liquid.

The customer evaluated the quotation and IWAKI Nordic A/S delivered the complete solution as agreed.

The picture shows a 15m³ tank plant with Ringnut cooler and pump station. The plant is supplied by IWAKI’s partner Weber Kunststofftechnik GmbH.